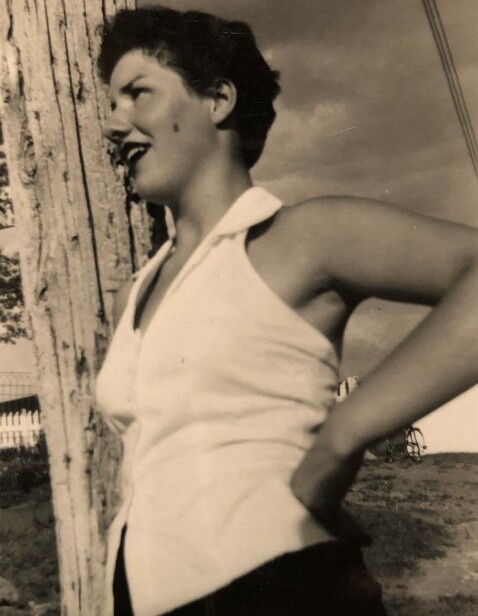 Juanita Ann (Hoff) Baesler of Russellvile, Arkansas was called to be with her Heavenly Father on October 6, 2020.

Juanita, born on September 18,1939 to Russian-German parents Frank and Clementine (Fleck) Hoff on a farm east of Richardton, North Dakota, was the fifth of nine children. Working from age fifteen as a nurses aide at Memorial Hospital, she graduated from St. Mary's and eloped  in 1957 to California with her beloved Erland Henry Baesler of Hebron, North Dakota.

The newly married couple lived briefly in San Leandro, California before moving to Castro Valley where their life was interrupted by the Army's call to duty which landed them in Pirmasens, Germany. During their stay, their first son Erland James was born in Munchweiler, Germany. They soon returned to the United States taking up residence in Hayward, California where their second child Audrey was born at Eden hospital in Castro Valley where Juanita worked in the maternity ward. The family moved to Sunnyvale, California in 1964 where their third child Leland was born. In Sunnyvale, Juanita balanced her time between the roles of wife, mother, homemaker, hostess at holidays, and working as a receptionist for an internal medicine practice in Mountain View which provided additional funds for their children to attend Saint Martin's Catholic school until 1974 when the family moved to a new, larger home in San Jose, California.

Juanita obtained her Licensed Vocational Nursing certification and worked as a nurse for the intenral medicine practice.  Additionally she ran the household, raised three children, and dabbled in oil painting and golfing with her husband for many years before she and Earl retired and moved into their new house in Ville Platte, Lousiana in 1992. Juanita continued to keep in touch with a large network of family and friends through phone calls, cards, and letters. Seventeen years later in 2009 the couple made their final move to Russellville, Arkanasa to be closer to their daughter Audrey and her family. During these years, Juantia led a more contemplative life, saying the rosary and her prayers, watching daily mass,  and enjoying visits from family and friends.

Throughout her life, Juanita was spiritually inclined, having a special devotion to Saint Terese of Lisieux, imitating her humble way of "doing little things with great love." Her parting words to her children are: "Be happy. Live a good life." and "Don't worry about me, I'll be okay."

Juanita will be laid to rest at the Rest Haven Memorial Park in Arkansas. The family will conduct a private memorial service.

To order memorial trees or send flowers to the family in memory of Juanita Ann (Hoff) Baesler, please visit our flower store.